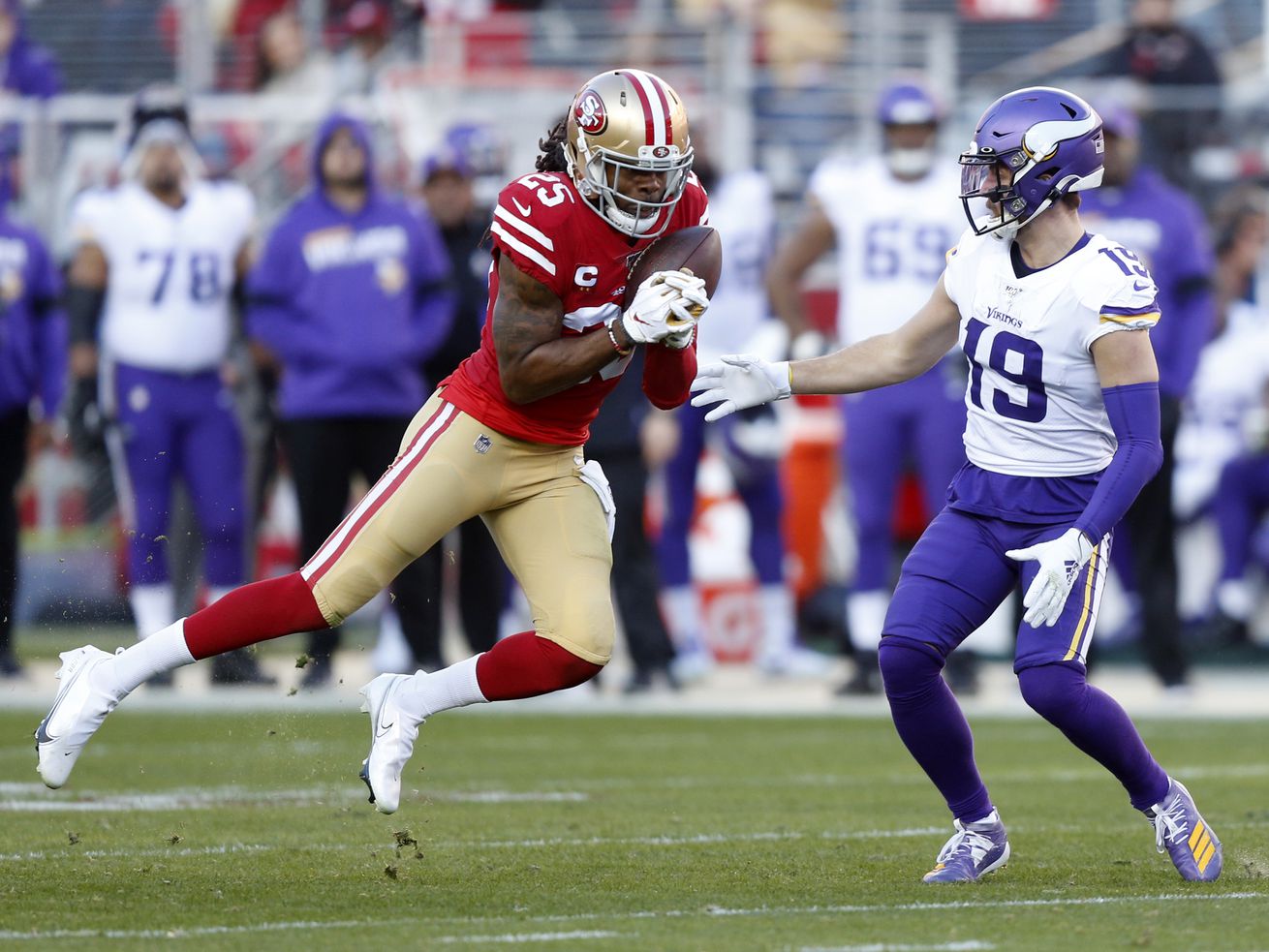 San Francisco had squeaked into the NFC’s no. 1 overall seed, but the team’s 27-10 demolition of the Vikings showed that they are as complete as any team. No one should be surprised if this team is lifting the Lombardi Trophy in a few weeks.

It’s hard to imagine now how the no. 1 seed in the NFC came down to a series of mistakes in the final regular-season game. The NFC was decided by a razor-thin margin, but on Saturday the 49ers looked like one of the most dominant teams in football. Top-seeded San Francisco pulled an old-fashioned ass-whupping on the Vikings, winning 27-10 in a victory that sets the team up to host the NFC championship game in Santa Clara next week.

The third quarter was a good reminder of exactly what makes the 49ers a powerhouse. With San Francisco up 17-10, the Vikings got the ball with 10:42 left, facing a critical possession. Outside of one flukey-looking touchdown to Stefon Diggs in the first quarter, Minnesota hadn’t gotten much going—but they’d managed to hang around, and this was their chance to even the score. But Kirk Cousins quickly found himself in third-and-9, and then this happened:

Whether Adam Thielen stopped too early on this route or Cousins just missed on the throw doesn’t matter much—it looked like Richard Sherman knew the route better than both offensive players. Sherman has reemerged as an elite corner this year, earning Pro Bowl honors for the first time since 2016. Two seasons ago, Sherman bet on himself, signing a self-negotiated contract with plenty of incentives; now he’s arguably the best corner in the NFL. The 31-year-old was Pro Football Focus’s highest-graded corner this season, giving up 0.44 yards per coverage snap (best in the league) and one reception per 19.1 snaps (second best).

Sherman is the rare type of player who can shut down an entire side of the field, and his interception cut the Vikings’ win probability by half. On the Niners’ ensuing possession, they rushed the ball eight times in a row and didn’t pass it once. The list of plays is downright disrespectful to Minnesota:

Eight rushes, 44 yards, three first downs, and a score. Except for the final touchdown run, not a single rush gained less than 4 yards. Minnesota finished the season with the ninth-best rushing defense by DVOA, and the Niners shredded them.

When the Vikings got the ball back, now down by 14 with 4:49 left in the third quarter, they went three-and-out. From there, the game began to slip away. While the Minnesota defense snuffed out the 49ers’ next drive, Vikings punt returner Marcus Sherels muffed the ensuing punt, handing the ball back to San Francisco. That mistake cost the Vikings three quarters of their remaining win probability:

The muffed punt turnover by the #Vikings cut their chances of winning by over three-quarters. #SKOL #GoNiners #MINvsSF

The 49ers turned that possession into a field goal, taking a 27-10 lead that they never relinquished. There was still a quarter to play, but the game was over.

The Vikings never had a chance to get back into it because they had no answer for the 49ers’ defensive line. Nick Bosa, who will likely be the Defensive Rookie of the Year, had six tackles, two sacks, an additional QB hit, and a pass defended. The 49ers defense as a whole sacked Kirk Cousins a whopping six times for 46 yards, completely disrupting the Minnesota offense. The Vikings picked up just 147 net yards—less than half of the 49ers’ total—and went three-and-out on six of their 11 drives (not including the third-down interception, which came on the third play of a drive). Minnesota had seven first downs and seven punts.

This game showed exactly what makes the 49ers a powerhouse. They have a dominant defense, anchored by the NFL’s premier lockdown corner and an explosive defensive line. And they have an offense built out of versatile, unique playmakers who can slice through great defenses even when Jimmy Garoppolo (11-of-19 for 131 yards, one touchdown, one pick) isn’t having his best game. The Niners are also a well-coached team, and their adjustments in this game (they yanked cornerback Ahkello Witherspoon in favor of Emmanuel Moseley after Witherspoon got burned in the first quarter) helped keep the team out in front from beginning to end.

The Niners barely earned the no. 1 seed—but a year after finishing 4-12, they are every bit the Super Bowl favorite that we’re used to seeing take up each conference’s pole position. Whether they see the Seahawks or the Packers in the next round, they’ll host a much better team than the Vikings (to say nothing of who they could see in the Super Bowl), but the 49ers clearly have the tools to take on anyone. The demolition of the Vikings proved it.

The best offers on the market today:

As Seen On TV

Any cookies that may not be particularly necessary for the website to function and is used specifically to collect user personal data via analytics, ads, other embedded contents are termed as non-necessary cookies. It is mandatory to procure user consent prior to running these cookies on your website.